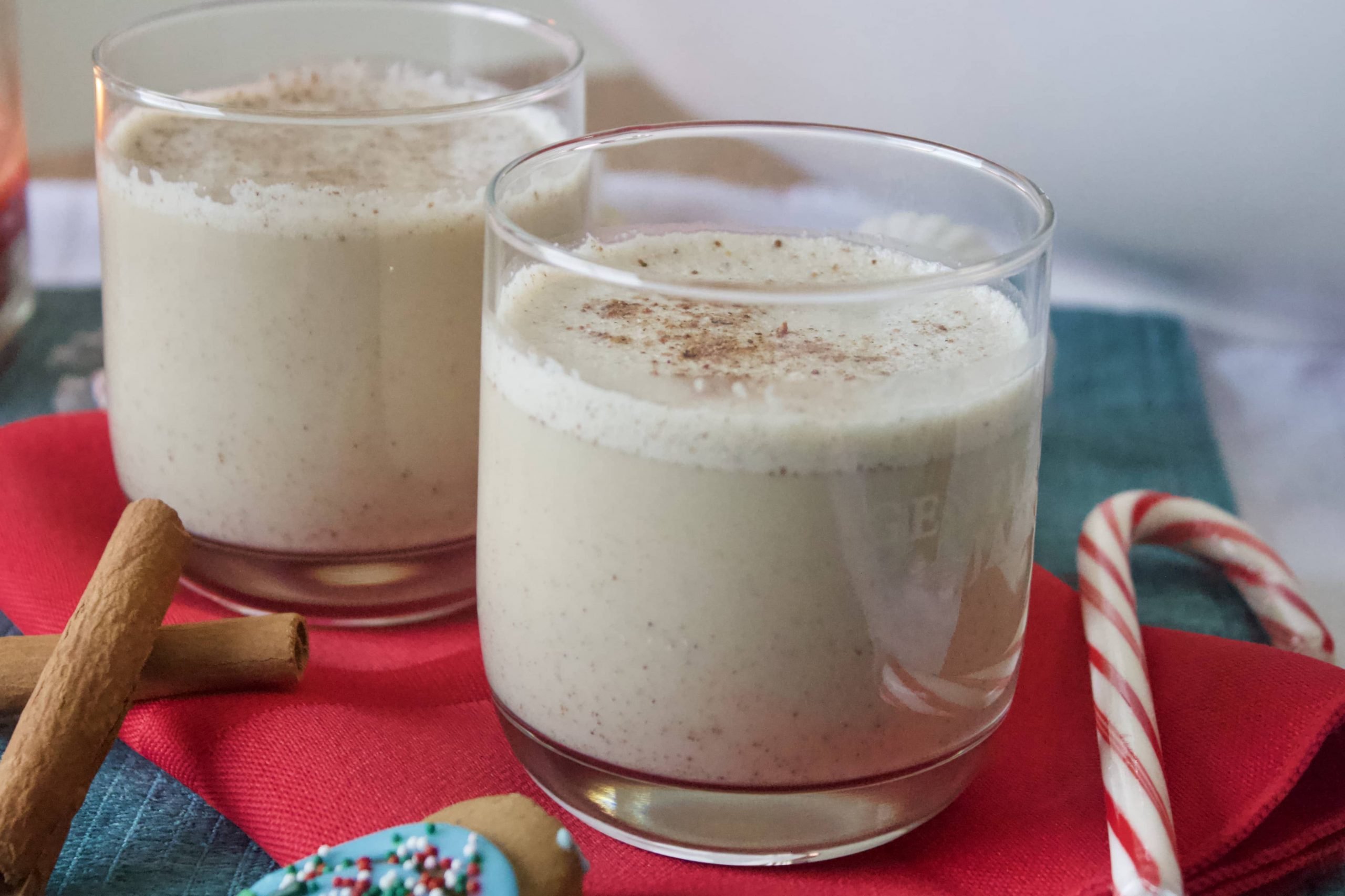 I make it every year for me… Er I mean for my family. Two batches. One with whole milk and heavy cream, and one with almond milk and full fat canned coconut milk for my sister-in-law and I.

Disclosure: All thoughts and opinions expressed here are my own. This post may contain affiliate links. I may earn a small commission from products you purchase through those links. Learn more here.

Traditional eggnog recipes include egg yolk, whole milk, heavy cream and rum, whisky or brandy. And they generally include whipped egg white to add a lovely foamy texture to the eggnog.

How to Make Dairy free Eggnog

Step 1: Separate the egg yolks from the egg whites. Then beat the egg yolks with the brown sugar and salt until they are a light yellow and kinda fluffy.

Step 4: Then return the whole mixture to the pot and reheat. Let it simmer for about a minute or two or until it reaches a 160F. Remove from the heat and let cool slightly before adding the egg whites.

Step 5: While the eggnog is cooling beat the egg whites and one tablespoon of sugar together until stiff peaks form. Mix into the eggnog and chill in the fridge for 4 hours. Make sure it is completly chilled before serving.

How to serve your eggnog

If you’d like a really fluffy eggnog, complete step 5 just before serving. And it will look something like the picture below.

There are many fun ways to spice up your eggnog for serving. I like to add some coconut whipped cream and some nutmeg or crushed candy cane. I used to serve mine in my mom’s corelle coffee mugs. Now I like to use clear glasses.

If you’d like to serve it with some liquor added to it, start by adding a small amount and flavour it to your liking.

Is eggnog with raw eggs safe to consume?

Are raw eggs safe to consume? I know the risk of salmonella is a concern. So here’s a few things to to note about raw eggs in regards to eggnog.

While both the egg yolk and egg white can contain salmonella, however it’s less likely for the egg white to support bacterial growth.

Alcohol can kill bacteria which is one reason why traditional eggnog is considered safe to consume with raw egg whites. Other recipes containing raw eggs use some sort of acid to kill the bacteria like vinegar or lemon juice.

The risk of getting salmonella poisoning is low but still remains a valid concern. I know raw eggs are not for everyone. So this recipe includes three ways to ensure the egg whites are safe to eat. And the egg yolks are cooked so you don’t need to be concerned there!

How to Heat treat egg whites

There are three ways to make sure your eggnog is salmonella free.

Option number 1: In order to heat treat them, place in a heat proof bowl over a small pot of water to make a double boiler. Add in 1 TBSP sugar and while they cook you need to whisk constantly by hand or use a handheld mixer. It  takes about 3 minutes and they should be hot to the touch. More detailed instructions can be found here.

It’s also good to note that if you’re using alcohol in your eggnog it also kills bacteria and reduces the risk of salmonella.

How To store eggnog

I store mine in a mason jar in the fridge. Homemade eggnog is best is consumed within 3 days of making it. It’s probably still good up to 5-6 days after but I doubt you’ll be able to keep it in the fridge that long. Of course you will have to use your senses to determine whether or not it’s still safe to consume.

Dairy free eating can be so tasty! For more information on the best dairy free options and recipes, drop your email below and subscribe!

This dairy free eggnog tastes amazing after being completely chilled. It may separate some so give the jar a good shake or stir before serving. Top with some coconut whipped cream and nutmeg for a very fancy drink.  *Or use 2 cups of coconut milk beverage. If you do this, the eggnog will be less rich but still good because the egg yolks still give it a fatty rich taste. **You may want to add in an extra ¼ to ½ teaspoon of both nutmeg and cinnamon. And also top with nutmeg and or cinnamon to serve. Remember that the flavours become more prominent after they have chilled and will be even stronger the next day. ***The egg whites can be cooked over a double boiler while whisking until hot.

If you’re looking for some other great Christmas recipes (they are not all dairy free) take a look at these from some of my fellow bloggers: